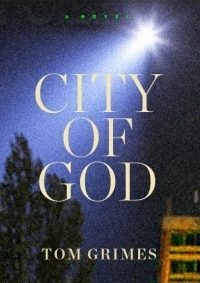 "What's Going on in City of God? Is it a political novel, detective story or a comedy of manners? A video game, a movie or a vision quest? Out of the clash of forms comes something that's funny, smart, dreamy: City of God feels for familiar features in a world where the worst has been done to distort and obliterate what's recognizably human. In prose that is brilliant, exact and surreal, the reader is swept along as Tom Grimes pins down the dystopia people used to fear the future would bring us, letting us know that it's here now." -- Charles D'Ambrosio

"Grimes's voice speaks to the spirit and his vision stretches the mind." -- The Boston Globe

"Transcendent in its own right for its breathtaking set pieces, its dissection of media marketing run brilliantly amok, its elegiac depiction of the last, sad fruits of class warfare. The ability to balance the rich grandiosity of riot scenes with the economy and restraint of this small interior marks Grimes as a writer in impressive command of his craft." -- The Philadelphia Inquirer