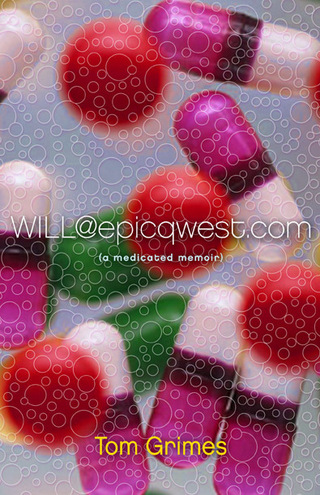 The problem with most cultural critique today is that it's just no fun. Determined to wrap postmodern meta-commentary around a chewy deconstructed narrative center, many hipster authors usually just end up writing drivel that grinds to a halt on its own self-importance. Yeah, things are fucked up, but do we have to be bored to death on top of all of our other problems?

Tom Grimes doesn't think so. A gloriously gleeful novel that rampages through the manicured gardens of academia, skips through the toxic waste dump of 21st-century consumer culture, and topples the ivory towers of cultural criticism, Grimes' WILL@Epicqwest.com is, above all, uproariously funny, delightfully smart, and unabashedly joyful.

Like contemporaries Mark Leyner and David Foster Wallace, Grimes mixes tongue-in-cheek commentary with brilliantly absurd plot devices to create a world that sings with techno-magical realism and frighteningly familiar déjà vu. The plot dips and sizzles like a downed electric line as we follow the epic quest of protagonist Will, an overmedicated student at the University-by-the-Interstate and his sidekick laptop, Spunk.

A contemporary Holden Caulfield trapped on a Holodeck by tripping technicians, Will careens to save Naomi (his unrequited love) from the clutches of the evil Dr. Bones, a billionaire mad scientist bent on destroying the world by using his patented fat-free substitute as a carrier for the dreaded Information Sickness. Along the way Will beds supermodel-cum-evil-sidekick Crystal Goodlay, falls in love with the exotic viral scientist ABD Chandra, battles his white-collar supercriminal father, and has his consciousness pulled like taffy by a pharmacopoeia of psychoactive substances in his quest for meaning and a cure to his drug-induced impotence.

The most refreshing thing about WILL@Epicqwest.com is its blatant openness. There's no pretension here, no literary sleight of hand. True, there is an amazing depth to the book, but the depth comes from exposure, not obfuscation. Grimes doesn't use metaphor: He reaches down to the darkest depths, pulls up the glistening absurdity that lies within, and then fillets it in front of us.

In the end, Grimes doesn't have to rely on tired conventions and hackneyed tricks to get the point across that the center has long since ceased to hold, and quantum causality is the best we can hope for. Will's world is our world already, whether we want to recognize it or not. The only sane response is to laugh, live your life, and party down at the Ground Zero of culture. -- Kirkus Reviews

Grimes' graceful novel may save literary fiction from itself

TOM Grimes' fourth novel is an important book, the culmination of 40 years
of formal and thematic experimentation in American fiction.

Since World War II and the rise of film and television, postmodern writers
have been trying to justify their existence. John Barth's story Lost in the
Funhouse, Gilbert Sorrentino's Mulligan Stew, the stories and novels of
Robert Coover -- these feature writers writing about writing, last desperate
cries from the dank recesses of an ignored American intelligentsia. While
our literary fiction writers and public intellectuals skulk in their private
hells, lashing out at popular culture, the American population ignores them.
Grimes, however, in WILL@epicqwest.com, just might rescue literary writers
from themselves.

WILL@epicqwest.com is the online journal of a character named Will who is on
an epic quest to rid the world of its latest and most deadly plague, I.S. --
Information Sickness. Investigating the causes and effects of Information
Sickness gives narrator/author Will the opportunity to talk about everything
from the history of philosophy to consumerism to pop culture to
existentialism.

Each chapter is titled like an 18th-century British novel, and as in
Laurence Sterne's masterpiece, Tristram Shandy, digressions lead to
subdigressions that lead in turn to sub-subdigressions.

Grimes' narrator is never reluctant to admit that he's writing a narrative,
using chapter titles such as "Part Two, Chapter Two: In Which I Sate the
Reader's Need for Narrative Drive, or Suffer the Wrath of the Marketplace"
and "In Which I Resort to the Illusion of Lyrical Realism and Find it
Lacking in the Face of Multinational Capitalism." Early in the book, Grimes
writes,

"You see, Will, on the one hand, it's difficult to capture the absurd
phantasmagoria of contemporary American existence without resorting to
satire. But the instant you go comic, it's like, hey, this guy's not
serious. Why's he refusing to pay lip service to sentimental, mainstream
notions of the individual? Why is he ignoring human pain?"

The problem of presenting the absurdity of our culture without being silly,
didactic or maudlin has plagued American writers since World War II. Joseph
Heller managed the trick in Catch-22, and Kurt Vonnegut pulled it off in
Slaughterhouse Five, but it's a rare American writer indeed who has managed
to instruct and criticize without sounding like a preacher of one
denomination or another.

Grimes, who heads the creative writing program at Texas State
University in San Marcos, combines the wit of Heller and Vonnegut, the
stylistic grace of E.L. Doctorow and William Gass, and the social awareness
of John Steinbeck and Upton Sinclair to produce a novel that not only the
literati will enjoy but so will the rest of us.

Whether he's writing an aphorism, a vignette, a fantasy, an expositional
passage or a rhetorical aside, Grimes is equally expert. In a realistic
scene featuring Will and his unfulfilled mother, Grimes shows his chops at
rendering sympathetic characters amid the humor and chaos that constitute
much of the rest of the novel. Will notes, "Drinking and listening to old
music only makes you aware of how much of your life is gone." His mother,
who is in her cups, says,

"Getting older just intensifies the feeling of how little we really get to
be in the world. How small a taste of everything each of us, even the
luckiest of us, ever comes by. Time makes us smaller by the second. And now
I'm forty-two years worth of seconds smaller.

"So," she raised her wine glass and drank from it, "that's my Joycean
epiphany for the evening. Or maybe it's a cheap red wine epiphany. I don't
know, and I don't care."

"Why isn't one life enough?" I asked.

"Maybe it was, once. It's just with so much to choose from, with so many
options, what's an ideal life? How do we know, when the only value is more?
How can we live anymore and not feel cheated?"

It's a rare fiction writer today who is brave enough to make unqualified
statements of truth in the voice of a narrator. Indeed, the rule of thumb
seems to be the Hemingway-derived "rule" of "show, don't tell." Well, cinema
and television have taken over the function of showing. Perhaps it's time
for fiction writers to once again tell. When Tom Grimes feels like saying
something, he says it loud and clear. Near the end of the novel, he writes,

"Being an American means to energetically pursue an empty future. Being
American means possessing the freedom to have conversion experiences based
on something you read in a magazine article. Being American means having the
liberty to be a bundle of paradoxes. And being American means you can rest
assured that the hour of our greatest glory and our deepest shame are only
five minutes apart."

Will's quest is our quest, and we're all searching for the same thing. As
Will says in the novel's closing chapter, "I learned that beauty, not
information, would save the world." With eloquence and grace, Tom Grimes, in
Will@epicqwest.com, makes his contribution to the world's beauty.