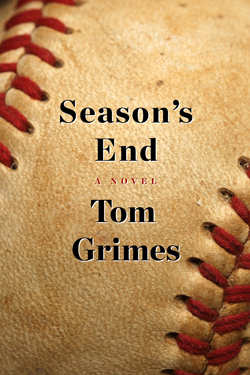 “Although Season’s End is a novel about baseball, it instructs, as compelling stories often do, in matters of the heart. At times meditative, at times funny and action-packed, Grimes’s prose curves in an arc that traverses the distance from the clear to the piercing.”
—Ann Beattie

“Season’s End is a fine and absorbing book by a remarkably substantial writer.”
—Thomas McGuane

Grimes's second novel -- the spirited tale of a rookie player fighting to survive in the complex world of professional baseball -- picks up where his first, A Stone of the Heart (1990), left off in evoking the bleak choices facing the previous generation of middle-class America and its children's mad desire to get away. Mike Williams -- the product of an urban, lower-middle-class family in conformist, TV-dazed, 50's America -- burns with a desire to triumph over his dreary origins, and luckily he has the talent and drive to do so. His ability to hit a baseball gains the newly married 20-year-old entry into the minor leagues, where he blithely experiments with marijuana, Zen philosophy, and superstitious propitiation to ``the game'' (including, in one instance, having a child) in order to improve his batting average. Surprisingly, this combination works, and Williams finds himself propelled into the altogether different world of professional baseball -- where after being named Rookie of the Year he is led by a manipulative team-owner, his own ambition and greed, and the soul-shaking tides of celebrity and wealth, ever deeper into disillusionment and mute despair. As Williams slams up against the consequences of his careerism -- the dissolution of his marriage and a deepening sense of alienation and betrayal frighteningly like his father's -- Grimes's own gift for lighting on the telling details of modern American life, evoking the pitfalls and pleasures of the pursuit of perfection, and laying out a standard American brand of the Faustian dilemma, combines with an obvious enthusiasm for baseball to make this an unusually engrossing coming-of-age tale, particularly appropriate for the post-boom 1990's. Passionate, entertaining, and refreshingly confident. --- Kirkus Reviews